Online poker is one of the fastest-growing mobile games themes, today. It has become so huge that some smartphone and tablet companies resort to poker games to boost the sales of their products. First, there was Microsoft that launched World Series of Poker: Full House Pro last June. Then there is Acer and Bluestacks that are expected to offer free Zynga poker games before the year ends. Microsoft and Acer made the right decision to use poker to attract more consumers. By offering a very in-demand kind of game, they can be sure that their products will look attractive to consumers. However, the two companies cannot guarantee the success of their poker games if they are using an incompetent game engine and simulator. What then is the most reliable open-source software for poker? 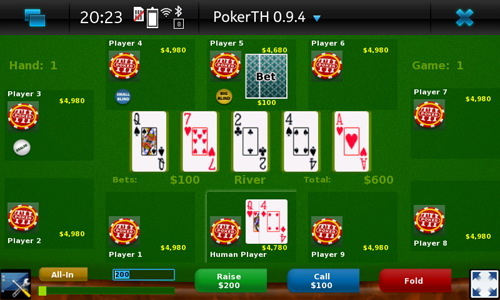 PokerTH is one of the most successful open-source softwares intended for web-based poker games. This software was first launched in 2006 and is available for Microsoft Windows, Mac OS X, and GNU/Linux. It is written on C++/Qt integrated development environment and is faithful to the Texas Hold 'em rules and betting system. PokerTH allows up to 10 human players and has multiple settings to let players customize their game plays.

PokerTH’s 10th and latest release, the Version 1.0, received 4.5 out of 5 stars from open-source software community SourceForge, citing the game engine’s simplicity and easy-to-use nature. It was launched in January of this year and features a number of enhancements and bug fixes to make it easier for players to optimize their games and characters. Other new features of the PokerTH 1.0 are the sound support for Android and Windows 8 desktops, translation updates, country flags, and new card decks that are meant for the changes in the action-label position. Version 1.0 has also made poker games more interactive through the online game name in window title, chatbot whitelist for poker expressions, and emoticons.

Among all these features, sociability is what makes the PokerTH 1.0 a stand-out. Many online poker titles succeed because they used Facebook as their main platform. Zynga, which now offers real-money games through Bwin’s partypoker network, is one of the many companies that benefited from the use of the globally successful social networking site. For five years now, the publisher’s Texas Hold’em remains as one of the most played games on Facebook. Infinite Edge Gaming, an independent business consulting firm from Sweden, said that aside from social gambling experience, Zynga games’ were victorious because of their interactive feature. It said that through Zynga poker on Facebook, people don’t only get to enjoy their favorite card game, they also get to interact with other people who have the same passion as them.

If you want to build a poker website that is as successful as Zynga, then PokerTH is what you should have in your major list of development tools. You should use free open-source software applications that are complete with features that meet the standards of the general online poker population.